She takes your hand

At first :  THANK YOU for your feedback , especially your responses and helpful messages on tumblr

The biggest change was adding the new guiding system which is now available in EasyMode. I've read all messages on twitter, even if i not respond directly (i live on the other side of this planet (the dark side 🙄)). Feedback was important to make decisions. It was clear that the game will change here and there. Just to mention that it NOT became a slow pacing horror ghost train, it's still 'brainfuck in cyberspace' and i do not recommend this game to fans of slowmo games. It was me a pleasure to add the guide. It has a positive effect in suiting the storyline... glues together things... 🤔 i'm not quite sure how to describe it exactly in english...

Next to the guide i've added and replaced some stuff all over the game. TENTACLES !... 🙄... aaahm yes.
Changed some orders and directions, implemented another secret area, modelled a slightly hidden pathway for those who like to avoid platforming. I balanced some difficult things here and there, made thin pathways wider.
BUT... everything that lowers the difficulty is only available in EasyMode.

Secreat areas, ways and story elements can be found in both modes. But if you play it for the first time or just tried it for a short time, i ABSOLUTELY RECOMMEND to play it in EASY MODE ! 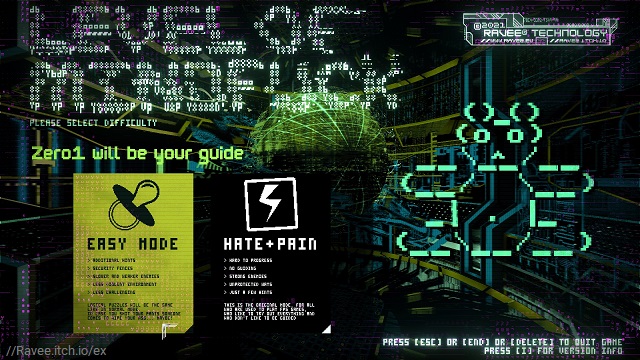 EasyMode is more about guidance than puzzles getting easier, logic puzzles are still the same... just zero1 navigating, giving hints and....
....recommending to solve the puzzle to proceed.
AND here comes the psychologic shit...
It sounds weird (and it took me a while till i've talked to some players and analysed the problem) but the game was a way too wild at some points, and the task (in players mind) about just solving a puzzle was quickly overwritten by the vivid world and all the activities around them.
...in that way or another....
Some smart people explained it to me very well, it wasn't the artstyle, but the mass of information (both audio and visual) that many people had a hard time with... and that's normal and not the exception... i am the exeption because i belong to a group of people that are used to chaos... That's not a "nice to have" skill.  This 3 week long survey was interesting, very helpful and i've learned a lot. Also i have no problem to improve the game. Would be sad to not optimize it. There are still people playing it, being surprised, having fun and thats good. Thats what the game was made for. Next to that, it's already prepared for other platforms, so it has to do its job... being a cyberspacy experience.

USER MANUAL added...
the download includes a nice little PDF, ... just for fun...
as if its 199X and you've just purchased a real boxed version of EXsynchronos 😁
Don't worry, no need to read it to play the game. It's just for those who like to get some story and development insights. 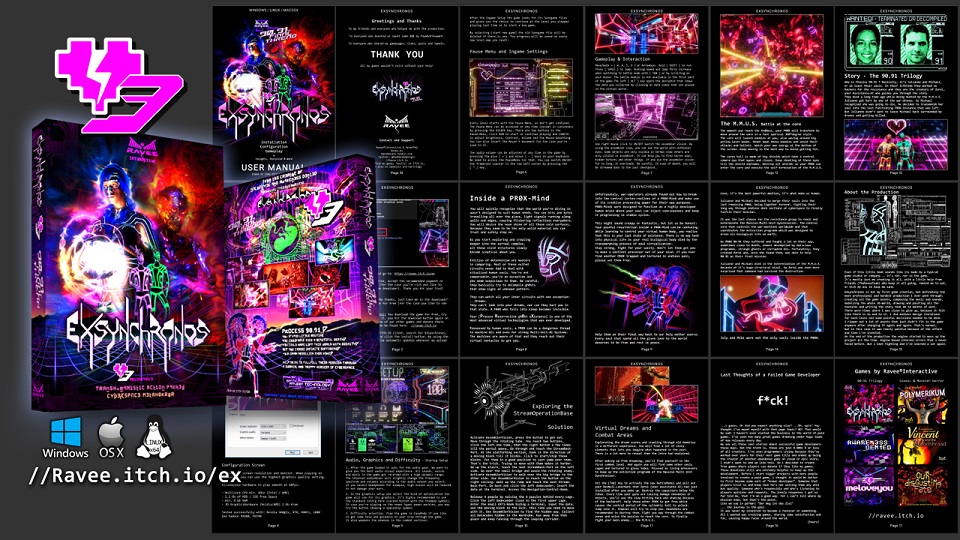 The update is now live for all OS (Windows, Linux, MacOSX)

happy easter and have a nice day,
Ravee