EXsynchronos took me 14 months of work and it was the most painful production i ever went through. Pretty much time for a game that was just planned as another short cyberspace puzzle to finish the story of Process 90.91 and make it's trilogy complete. But just another cyberspacy game wouldn't suit the whole story. It deserved much better.

You'll find my games in a stable state at their release. They got testet a lot on all 3 common operating systems, yet i always mention, there will be bugs that even the alpha-tester didn't found.

I fix bugs as soon as reported, next to that, i optimize gameplay according to players opinions. It's hard to balance the difficulty of your game when you're used to play games that are challenging.

How to handle difficulty,
while trying to tell a story.

I love games that give me the freedom to explore, games that just throw me into some weird world without guidance. Games that want me to try and click everything. As soon as i see a maze or weird structure, you see me running into it, happy like a kid jumping into a ball pool.

I love games with high difficulty, jumpscaring me from the chair, making me torture my keyboard or controller, causing my brain to overheat, not by being unfair, but by forcing me to be quick and concentrated.

I grew up with all the hard flashing and blinking arcade machines.

I beat most games and if not, i accidently break them.

I've learned that many players are not like this.

Feedback from players is important to me. It's important to any developer who takes care of their games and its players. If there is anything wrong with your game, you need to fix it. It is also important to know what was right, what players enjoyed, what they liked, because these points can be seen as proof of concept.

If someone sucks at your game, that person probably tells you that your game sucks. Those players won't tell you that they didn't expect a game to be a challenge. I've learned that patience is gold, which means first collecting a lot of feedback, before changing anything on the gameplay. Do not break the your game, just because someone doesn't like it, this player will run into the same issues again and again anyway, no matter how easy you design it.

Over the last years I've learned a lot more than i've ever learned before in software development. I'm experimenting much when creating puzzles and challenges. There are always questions like:

Will players see where to go?

Will players think how a puzzle can be solved?

Will they look around and search for hints?

Will they recognize the puzzle being a puzzle?

Will they know that they'll be unable to proceed without solving the puzzle?

Will they understand that pressing a button can be useful even without a sign telling them "Push Me"?

..i mean, there will be exceptions.

Also you can't make it right for everyone.

Type A or type B.

Everyone is different, but when it comes to first-person game design i've mostly recognized two types of players. I used my research as some sort of "think-help" to keep both viewpoints in mind. Doesn't mean that the following categorization applies to gamers at all.

A) Players that don't like to twist their brain. But that sounds like an insult, so let me point out, that this can be for good. It can make things easier for developers.These players consume a game like a movie. I've watched this type of players having fun with simple smartphone games too. On PC or Console, when playing horror games or adventures, they mostly enjoy games with linear stories and guiding.
Don't give them hard challenges. Don't force them to remember the virtual environment or a number. Instead, entertain them like a movie, just let them decide how fast it progresses. Easy!

In contrast to that:

B) Players that love to think, combine, imagine, remember etc.. seing it as a part of the challenge. At all: INTERACTION! Free decisions, more than one solution or hints for the solution, fair but difficult puzzles.
I've watched those players don't have any problems to recognize a puzzle, they are used to many game concepts, no need to explain that you want them to push that button. They will click everything that looks like something to interact with. Some frustration here and there.. they don't give a fuck. Reveal story or create something entertaining as a trophy for those players.
They don't like to get told where to go next, they just need the main task. They need a plan for their mission or at least they need to know  what's the goal. "...Wait?! .. is that a maze? ...boooooring!", because they know how to get out of every maze.

Creating games for type B is much harder, even if you count yourself to this type of gamer. The more freedom of interaction you give them, the more logical combinations and actions you have to check and test. Multi-Puzzles including more than one different part, need to be overthought clearly in all kinds of solutions and orders.

Give them mysteries, give them riddles, don't spoil the whole story right at the beginning, but if so, twist it for their surprise.

These points are one of the reasons why creating this game took so long. (Long, from my view). Fellow developers told my that i was damn fast for a game of that size. Of course i've worked all day and night on the project, even on weekends because of the lockdown. If i had done this in a 5day work week, it would be still in production.

I recently split the game in two modes.

EXsynchronos was that type of challenge directed to type B when it started. But i like to include as much players as possible. That's where the EasyMode comes in. The EASY-MODE is designed to help players to consume the game, the HATE+PAIN MODE is free of any guiding (i called it HATE&PAIN to keep A-Types chosing EasyMode). 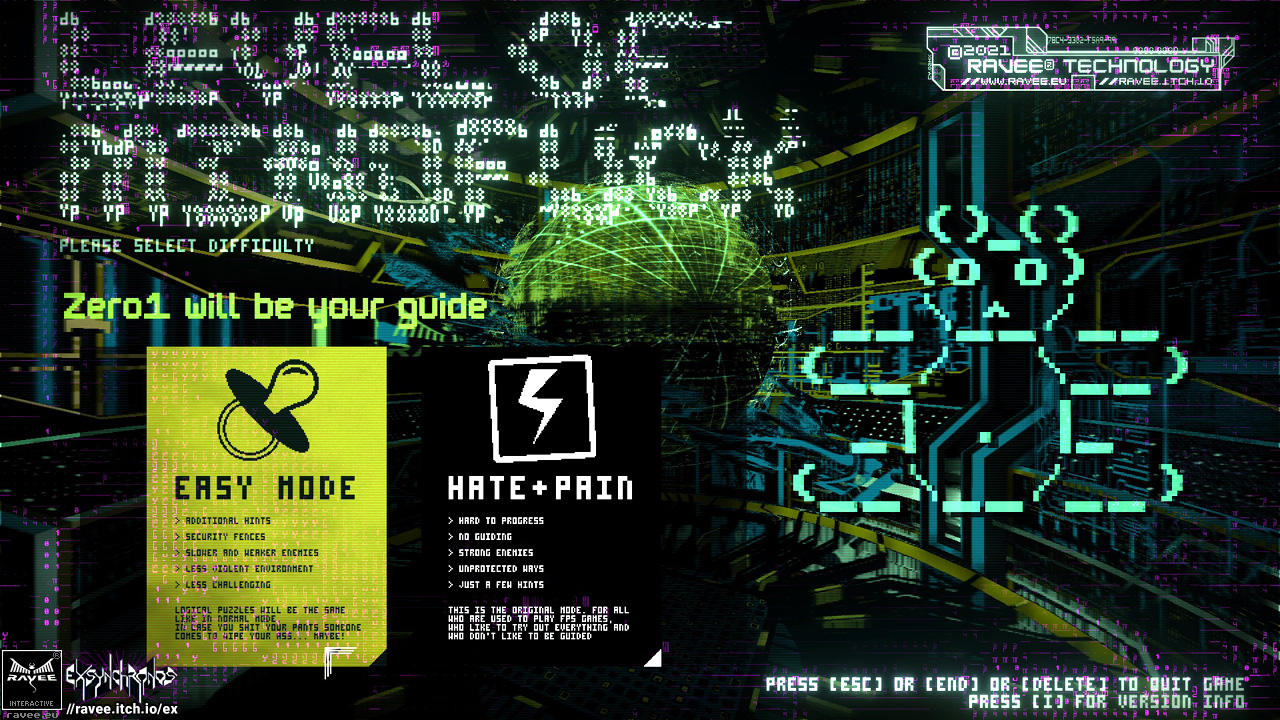 The difference to the usual consumer game is, that the logic puzzles are still there. I saw players who didn't got the logic behind the buttons, because they can be switched on/off, but every button on the grid also switches his 4 brothers.

A simple logic puzzle with 3x3 buttons that wants you to recreate a pattern shown right next to the button panel. Most players i've watched just pressed two or three buttons and were like: "Ahaaaaa! simple logic! okay lets solve this shit".

BUT in contrast to them, some people weren't able to combine the simple logic by just watching the buttons while clicking them on and off.

I have to admit, that i used a rather dirty solution, than a proper one, to include those players. I programmed the puzzle to mark itself as solved after 100-200 clicks. The concept is similar to: If you have no idea to just look into the drawer to find the hidden key...20 minutes later it will appear directly on the table with a blinking circus sign pointing on it and saying HIDDEN KEY. 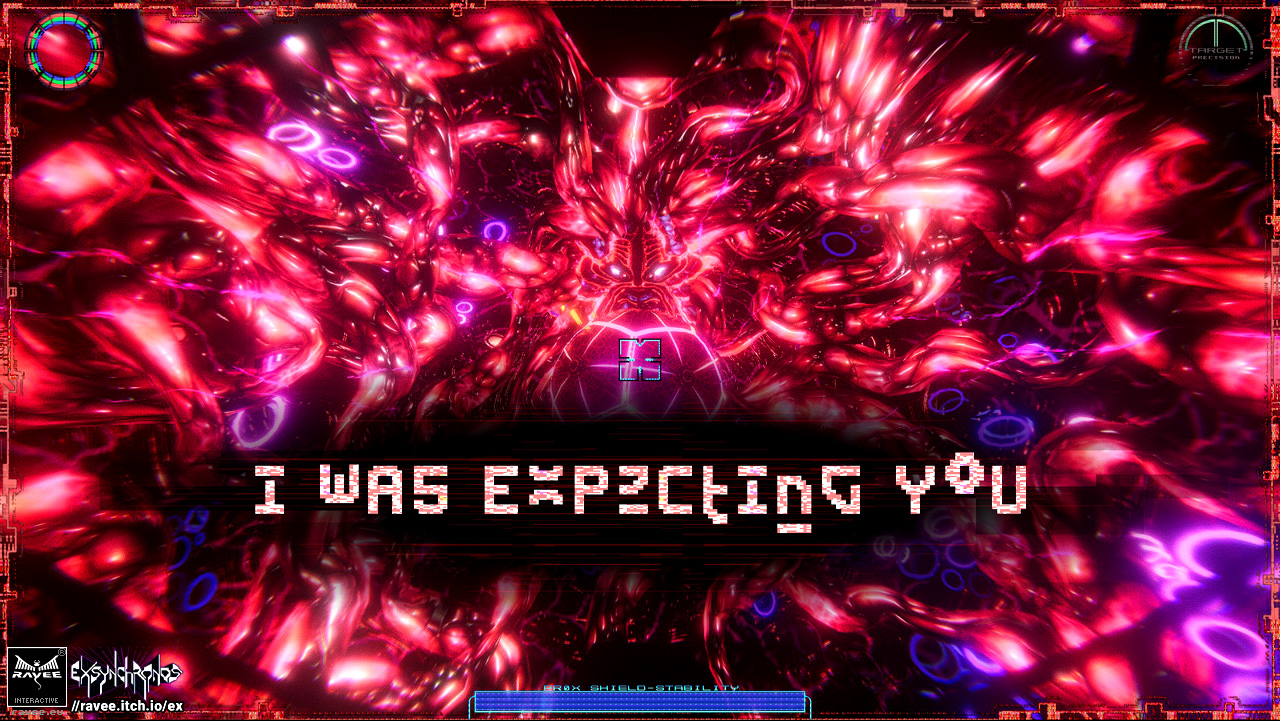 My mistake with this production was, to give it out for free, hoping for some donations to help. Not that there were no donations, but it's about 1 out of 100 who shows some heart for indie developers. People rather spend 60$ for a broken game, where they have to wait months for fixes. Maybe in some future, indiegames get some value.

I'm happy with EXsynchronos, so the fans are who waited for it. I would have never produced it without the support the first two episodes received. Once again i feel releaved that i was able to handle this huge project and even more happy to see many players having a nice time and being fascinated, while exploring the game.

EXsynchronos is still a challenge, but it rewards players with an interesting and twisty story, a cinematic intro scene, cutscenes... and from my personal view, the most surprising and beautiful ending i've ever created for a game.

I disagree about the money part. You've created something awesome that will be enjoyed for years to come by others. When people make recommendations for the best free games from Itch or " top free games " lists on other sites your name/game can be among them. Not only that but by doing this you gained fans who will follow your future projects as well. People get so hung up on money to the point that they completely forget all the aspects of what they created.

What if your game is what got some kid who isnt able to afford new games through their day? Someone who found it and uses it as a means of escapism. That even if it were for a brief moment it brought them happiness. All this was thanks to what you put out into the world.

You're correct. I agree. This is my sixth free game now and i'm just a bit pissed how indiegames get handled (not only mine). So many great games on itch and it makes me sad seeing devs gave up cus of the named points. I create games for passion, i never hung up on money, thats why i left software business and became a poor dev on demand... i know it sounds stupid, but once you survived a burnout you decide for your health instead of career. Its just that my workstation and tools slowly falling apart. i cant affort any hardware right now to fix it, nor will i be able to create anything. I feel sad when i cant design and code, hope there will be better times. ✌

There will be, man, just gotta keep pushing through! I dont know what your stats as far as followers goes but I bet if you charged something like $5 for a new project you'd have a big enough following by now to help you pay for tools. I'd try to make my stuff available on other platforms too.

Just dont be " That asshole " who advertises their game on a platform then not release the game on the site that they were advertising on. I see that happen all the time on Itch where people just use this site to advertise for Steam but then refuse to release the same game on Itch.

Naaa don't worry. I'm not that kind of person. Itch is still the place to be and i'm not a fan of these "use itch as steam advertising" tactics. Just wanna bring some gaming fun to people, trusting in donations and i hope that will work in the future too 😊